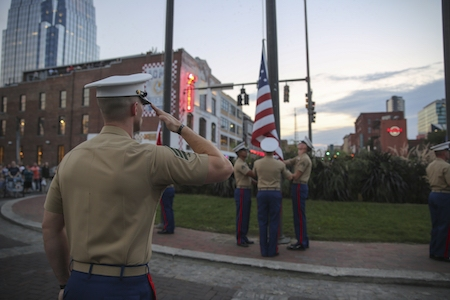 Each year, the United States Marine Corps chooses a different city to visit as an annual celebration of “community, country, and corps” and to honor the service and sacrifice of Marines and their loved ones. This year, it’s Detroit!

From dbusiness: “Metro Detroiters and over 700 Marines are invited to attend events planned around the city at no cost. Each day of Marine Week … will begin with reveille at 6 a.m., and close with taps at 10 p.m. ‘The United States Marine Corps is honored to share our valiant history and proud future with Detroit,’ says Captain Phillip J. Kulczewski, a Detroit native. ‘Marine Week is a great opportunity for residents to meet many of the dedicated men and women serving our country. It’s also a unique chance to experience the equipment and excitement of Marine life through family-friendly activities that highlight our honor, courage, and commitment to America.’ More than 80 activities are planned, including an opening ceremony, silent drill platoon demonstrations, interactive displays of the latest Marine Corps’ technology, vehicles and aircraft, musical performances by the Marine Corps band, Marine Air-Ground Task Force demonstrations, viewing of the Marine Corps daily workouts, and a variety of community projects.”

Much of this week’s activity will be transpiring right outside Kerr Russell’s “front door” – from the Ally Center where our office is located, through Campus Martius, and into Midtown. The full schedule can be found here. We at Kerr Russell are excited to have our beautiful city serve as the backdrop for this event, and we appreciate those who serve and sacrifice on behalf of our nation. We asked our colleagues if they themselves had served in the Armed Forces or had family members who had served. Here is a sampling of some of the answers we received: