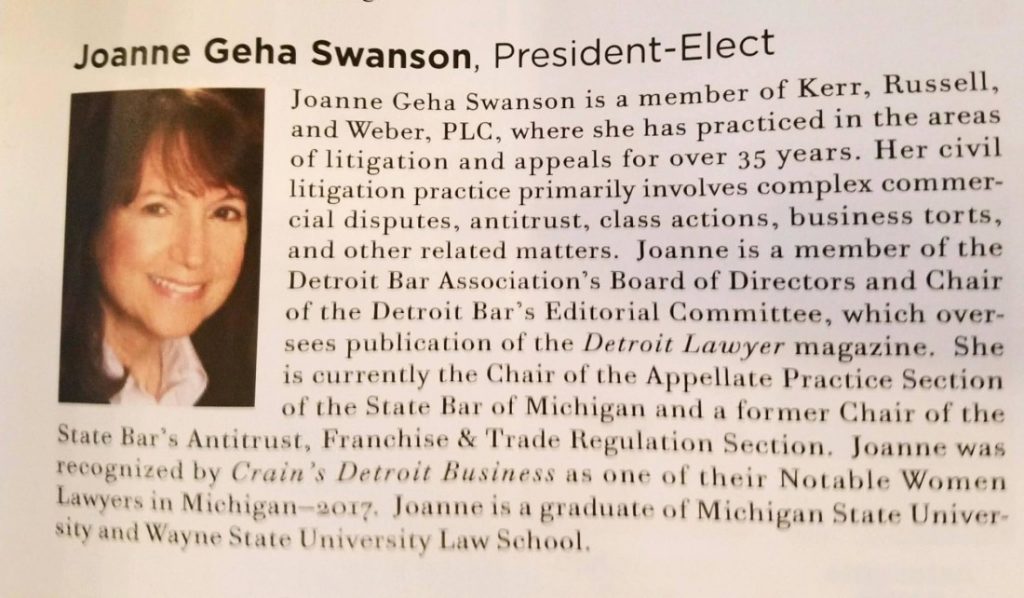 We spy with our little eye … Kerr Russell member Joanne Geha Swanson in the program of this year’s Detroit Bar Association Annual Meeting. Joanne, we are so proud of your leadership and everything you do for this community. Thank you to William Blasses for sending this from the event … while it was still in progress!

Joanne Swanson is past chair of the State Bar of Michigan’s Antitrust, Franchise and Trade Regulation section; a current member of the section; and chairs the editorial board of the Detroit Bar Association’s Detroit Lawyer magazine. Her practice also involves legal malpractice.

In recent years, Swanson successfully represented a physician in a suit brought by the family of a patient who declined a blood transfusion based on religious beliefs and subsequently died.

“Her keen legal mind has been at the fore of a number of landmark appellate matters, but what will strike you about Joanne is her humility and her inclusiveness,” said Kerr Russell member Stephen McGraw. “She will always shine the spotlight on others. She is an ardent supporter of metro Detroit, volunteering her time across a number of community organizations, and encourages our firm to always take a leading role on efforts to engage with the community.”

She has authored numerous published articles related to her areas of practice, and she has lectured on topics related to litigation and the appeals process. She contributed the Michigan chapter to the recently published Practitioner’s Guide to Class Actions, 2nd edition from the ABA’s Tort Insurance and Trial Practice Section. She also served on the editorial board for the book. Swanson wrote the Michigan chapter and served on the editorial board for the first edition, as well.

Joanne is a fellow of the Michigan State Bar Foundation a