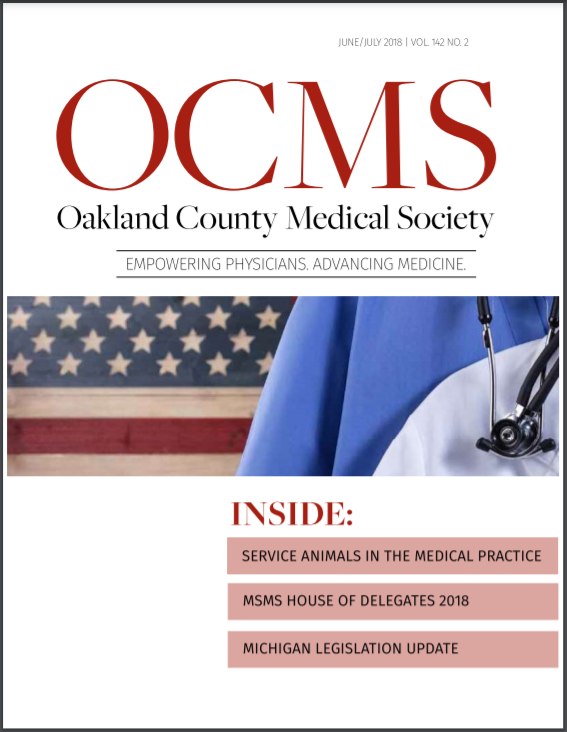 The first six months of 2018 has seen a flurry of legislative developments affecting the practice of the health professions in Michigan. Early in the year, significant legislation affecting the prescribing of controlled substances generally, and opioids in particular, became law.

At the end of May, 2018, equally significant legislation strengthening Michigan laws to protect patients from sexual assault was adopted by the Michigan House. This legislation is expected to be adopted by the Senate and enacted as law in June, 2018. The legislation becomes effective 90 days after enactment. The following is a summary of the key provisions, as adopted by the House, affecting physicians and other health professionals. After the legislation becomes effective, physicians should look for updates from their professional associations to determine whether any changes were subsequently adopted to the legislation, and whether any new or different protocols should be incorporated into their medical practices.

Before Senate Bill 872, victims who were minors when sexually assaulted had 2 years or until their 19th birthday, whichever was later, to bring suit. Senate Bill 872 provides that victims who are minors when sexually assaulted may file suit by the latest of (i) the victim’s 28th birthday or (ii) 3 years after the victim discovers, or through the exercise of reasonable diligence should have discovered, both the injury and the causal relationship between the injury and the criminal sexual conduct. The 3-year discovery period runs indefinitely; there is no statute of repose that cuts off the time to file suit under the discovery standard. As with claims by adult victims, it is not necessary for claims by minors that a criminal prosecution was brought or that any prosecution brought resulted in a conviction.

Senate Bill 872 has limited retroactive effect. It provides that an individual who, while a minor, was the victim of criminal sexual conduct after December 31, 1996, but before 2 years before the legislation’s effective date, may file suit within 90 days after the legislation’s effective date, if the person alleged to have committed the criminal sexual conduct was convicted of first degree criminal sexual conduct against any person and admitted that (i) he or she was in a position of authority over the victim as the victim’s physician and used that authority to coerce the victim to submit, or (ii) the defendant engaged in purported medical treatment or examination of the victim in a manner that is, or for purposes that are, medically recognized as unethical or unacceptable. Claims that meet the preceding qualifications that are not filed within the 90-day period will be time-barred by the statute of limitations. Retroactivity is not available to victims who were adults when sexually assaulted.

It remains to be seen how Senate Bill 872, in practical terms, will affect the practice of the health professions in Michigan. Some speculate that Senate Bill 872 may cause physicians and other health professionals who treat minors to begin maintaining clinical records indefinitely, due to the discovery standard. Michigan’s minimum required retention period for medical records is generally 7 years from the date of service, unless a longer period is required by federal law or other state law (e.g., see House Bills 5783 and 5793, below).

The legislation will require written parental consent before procedures involving vaginal or anal penetration may be performed on a minor. Such procedures must be within the scope of practice of the treating health professional. A medical assistant or another licensee or registered health professional must be in the room during the encounter. Exceptions are provided for treatment (i) necessary and associated with, or incident to, a medical emergency (i.e., a circumstance that in the licensee’s or registrant’s good-faith medical judgment creates an immediate threat of serious risk to the life or physical health of the patient), (ii) if primarily related to the patient’s urological, gastrointestinal, reproductive, gynecological, or sexual health, (iii) if performed at a children’s advocacy center, as defined in Michigan’s Child Protection Law, (iv) if performed for purposes of a sexual assault medical forensic examination under Section 21527 of the Public Health Code, (v) if performed for the purpose of measuring the patient’s temperature, and (vi) if performed for the purpose of rectally administering a drug or medicine. Criminal penalties and fines are provided for violations of the legislation. The Department of Licensing and Regulatory Affairs is required to create a standardized consent form for use by licensed and registered health professionals.

House Bill 5659. This legislation adds physical therapists, physical therapist assistants, and athletic trainers to the list of individuals required to report suspected child abuse or neglect. Under existing law, physicians, dentists, physician’s assistants, nurses, and certain other licensed professionals and individuals who have reasonable cause to suspect child abuse or child neglect are required to make a report to the Department of Health and Human Services’ centralized processing center.